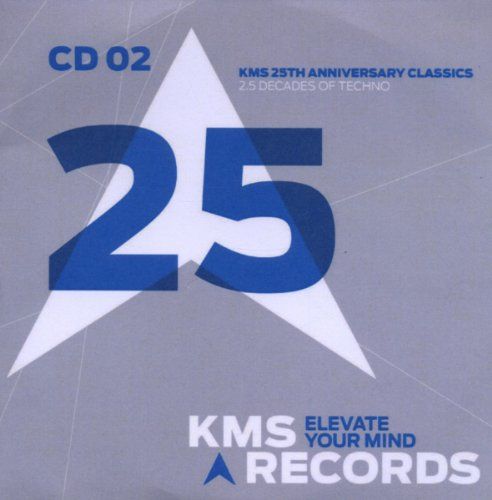 Founded in 1987, by Kevin Maurice Saunderson, his first release was Triangle Of Love produced by, 'Kreem', (just one of his many guises), little did Saunderson know, at that time, that two and a half decades later, he would still be releasing music on his KMS label. Let's go back to the beginning... Born in Brooklyn in 1964, Saunderson moved to the picturesque Detroit suburb of Belleville, when he was nine, a different world to the urban decay of the city itself. Saunderson has an enviable dual reputation. To the dance cognoscenti he's one of the Belleville Three, (with Saunderson being the 'Elevator', Juan Aktkins being the 'Originator' and Derrick May being the 'Innovator'), the trio of friends invented Detroit Techno. The trio met at Belleville High School where, Saunderson befriended Juan Atkins and Derrick May, who introduced him to the eclectic post-disco playlists of Detroit radio DJ Charles The Electrifying Mojo Johnson. Johnson played disco, funk, Prince, Parliament/Funkadelic, Kraftwerk, the B52's and Tangerine Dream, to name just a few. Saunderson already had a serious love for music, but he didn't realise he was going to produce music, until then. In his first year at East Michigan University, where he studied telecommunications, he gave up football to become a DJ himself. He took inspiration from visits to Larry Levan's Paradise Garage in New York and Frankie Knuckles' Warehouse and Music Box in Chicago. Saunderson, Atkins and May, played at campus parties, until setting up their own club in Detroit, the fabled Music Institute. Of the Belleville Three Atkins was the first to make a record, with electro group Cybotron's Alleys of Your Mind in 1981, then May, with Rhythim is Rhythim's Nude Photo in 1987. Inspired by his friends, Saunderson bought some basic equipment and made his own debut in 1987 with Triangle Of Love. I just had a good ear and a good heart for music, he says. Juan Atkins led me into DJing which led me into making extra beats to play in my set. Then I started learning how to play basslines, putting a lot of work in, just elevating it from there Undeniably, Saunderson is a gifted producer (going under guises such as Reese, E-Dancer, Tronikhouse and Reese Project), remixer and a tireless international DJ. To lovers of great pop music he's also one third of Inner City, who made regular visits to the Top 20 in the late 80s with jubilant hits like Big Fun and Good Life, paving the way for hundreds of underground-to-chart crossover records to come. On a visit to England in 1988 Saunderson realised that a mythology had built up around the Belleville Three. To his even greater surprise, Big Fun became not just a massive club record but a pop hit. He also helped to revolutionise remixing when he worked on We Know It by Wee Papa Girl Rappers. Over the following decade Saunderson would continue to produce imaginative remixes for the likes of New Order, Pet Shop Boys, The Shamen, Paula Abdul and the Lighthouse Family. Even whilst travelling the globe, djing or touring with Inner City, Saunderson continued to produce and release not only his own tracks on his KMS label (with tracks such as The Sound by Reese, Rock To The Beat by Reese, Truth Of Self Evident by Reese & Santonio, Let's, Let's, Let's, Let's Dance by Keynotes and Colour Of Love by The Reese Project), but he also released tracks by other up and coming artists, releasing classic underground gems, such as Flash by Fix, Can You Feel It by Chez Damier, Soundscape by Kosmic Messenger, Definition Of Love by Kaos and Use Me by R-Tyme. The list is endless. Fast forward to 2012 and it's hard to believe that KMS is still releasing records. With such a long history, what better way to celebrate than to release a special CD Boxset. The KMS 25th Anniversary Classics will be released on CD, Digital (and for those vinyl collectors, there will be 6 x 12 Samplers). Each format includes a plethora of gems which have been released on KMS over the last 25 years. KMS may be celebrating it's 25th Anniversary, but there's no slowing down for Kevin Saunderson. He's still producing, remixing and djing (all over the world). Here's to the next 25 years....